Liquidity May Become A Major Market Risk in the Months and Years Ahead. 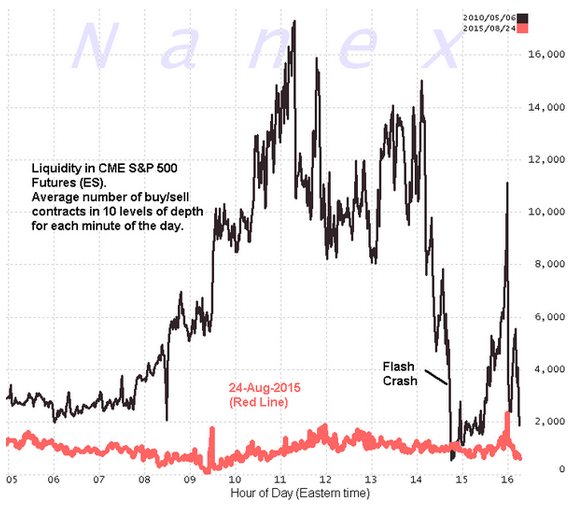 Liquidity issues in major liquid markets are of the utmost importance to investors and deserve greater focus. A well-documented flash-crash of some type occurred on August 24, 2015, resulting in market stoppages, dramatic price movements in supposedly “conservative” exchange-traded funds (ETFs), and general market panic. The reasons for the flash crash, as is to be expected, are many. People who we respect offered explanations here and here. The Federal Reserve has weighed in as well at times, notably last year on liquidity risks with Leveraged ETFs here. I doubt there will be agreement as to the true causes, but the reality for investors, small and large, remains the same. Financial markets have been subject to grotesque levels of manipulation by both governmental and private actors, including high-frequency trading (HFT) firms, and investors are setup for even worse volatility and liquidity shocks.

Very few of the touted new solutions such as robo-advisors improve individual investor behavior in these instances, in our opinion. Investors are still very likely to react in knee-jerk fashion to these shocks. As Todd Frankel of the Washington post argued here, they were actually saved last Monday by discount brokerages such as Ameritrade and Scottrade. These brokers essentially shut down and locked investors out of trading, during which time prices recovered.

Even institutional investors are getting worried. As Barrons reports here and here, many large traders, including those at JPMorgan, on Wall Street are growing increasingly nervous about the concentrated actions of funds that broadly define themselves as quant funds (CTA, risk parity, volatility managed, etc.). The actions taken by these firms are not unethical. The issue is the avalanche effect when every fund in the space commences technical model-based selling at the same time in the range of hundreds of billions, essentially using the same core model frameworks and risk management disciplines. Critically, just when investors needed them, HFT firms stopped providing the liquidity they so publicly claim to provide and left the marketplace the morning of August 24, 2015.

Luck and hopes are insufficient solutions for investors. They deserve better and should demand more. It would be an appropriate start for major market participants and regulators to at least acknowledge the future possibility and likelihood of these types of liquidity shocks. Beyond that, investors should expect little more, and should prepare themselves. The possibility of these types of shocks can be monitored. As I have argued, they often occur in complex systems, such as financial markets. These shocks occur when repetitive interactions of individual market participants produce a progressive and more global cooperative process occurring over the whole system. This increasing build-up of “market cooperativity,” or effective interactions between investors, can ultimately evolve into nonperiodic and non-linear cyclical behavior (such as the major shifts or rare and sudden extreme events we saw last week).

The best way to protect against these events is to apply non-linear analysis, often applied in other fields where complex systems exist. These approaches have yet to gain wide favor in financial markets. My research has shown us that financial markets are very susceptible to significant volatility and liquidity shocks near-term. I believe it is prudent that investors exercise extreme caution and maintain a vigilant watch for such shocks during the coming weeks and months.