The Trend is Not Your Friend in Crude Oil. 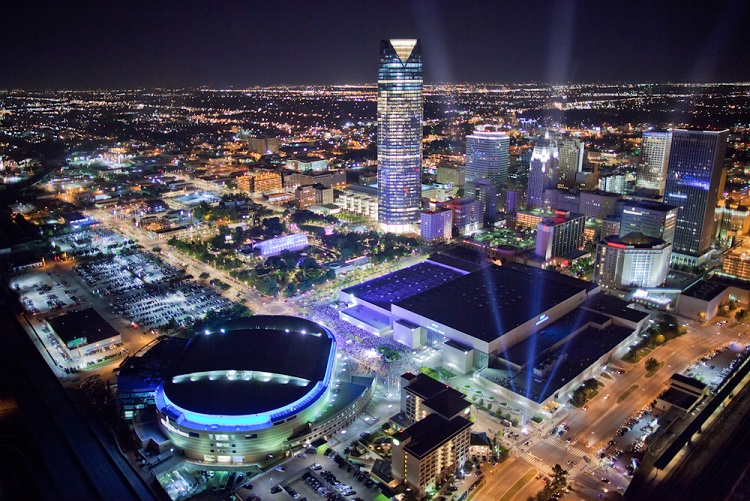 The naval Battle of the Chesapeake in 1781 proved crucial and somewhat decisive for the American colonies during the Revolutionary War. In the relative calm of 2016, a new battle of the Chesapeake is emerging. Chesapeake Energy Arena in Oklahoma City will be the site of what many expect to be Kevin Durant’s last stand as a member of the Oklahoma City Thunder, who just a few years ago were the toast and future of the NBA. It seems nothing short of a trip to the NBA Finals will be sufficient; however, such a trip will likely run through Golden State and San Antonio, the #1 and #2 seeds. The Warriors and Spurs are not just higher seeded teams; they are perhaps two of the greatest teams in NBA history. The trend does not favor OKC.

The fortunes of the Thunder have mirrored those of their corporate sponsor, another Chesapeake facing perhaps its last stand. Northwest of the arena is the headquarters of Chesapeake Energy Corporation (NYSE: CHK), the nation’s 2nd largest natural gas producer and 14th largest oil producer. Already beset with two years of falling Oil & Gas prices, the company recently contended with controversial headlines surrounding the life and death of legendary founder Aubrey McClendon. Chesapeake stock is down 94% from its 2008 high and remains 45% below its 2007-2009 financial crisis low.

For many investors, Chesapeake is the poster child for the Oil & Gas market, so I pay attention to it. Today, Chesapeake announced that it has amended certain agreements with lenders to give it more flexibility with covenants and terms. In return, the company essentially pledged all of its assets to its lenders. Analysts who follow the company have made statements saying that the agreement will allow Chesapeake “time to ride out a low commodity price environment”. Equity holders seem to be unfazed by the pledge of the company’s assets. As of this writing, Chesapeake stock is at $4.5, up 19.7% today. This is a whopping 200% increase from the February 8th low of $1.5.I don’t know much about the inner workings of Chesapeake, but I do know a thing or two about debt. This seems like an “all-in bet” for equity holders. It was an easy bet for management to get comfortable with, given that their stock traded down to $1.5 in February, certain bonds traded at 80.5 cents on the dollar, and bankruptcy talk was in the air. In all likelihood, the corporate lenders know what they are doing and have protected themselves. Do equity holders realize what they are doing?

What’s the case for Equity holders?

If this is an all-in bet, margin of safety may be quite low and equity holders should be clear-eyed about the future. Take a look at the charts below. Each are monthly price charts from 2000-today. One is Crude Oil futures, another is Natural Gas futures, and a third is Chesapeake stock. Can you tell which is which? 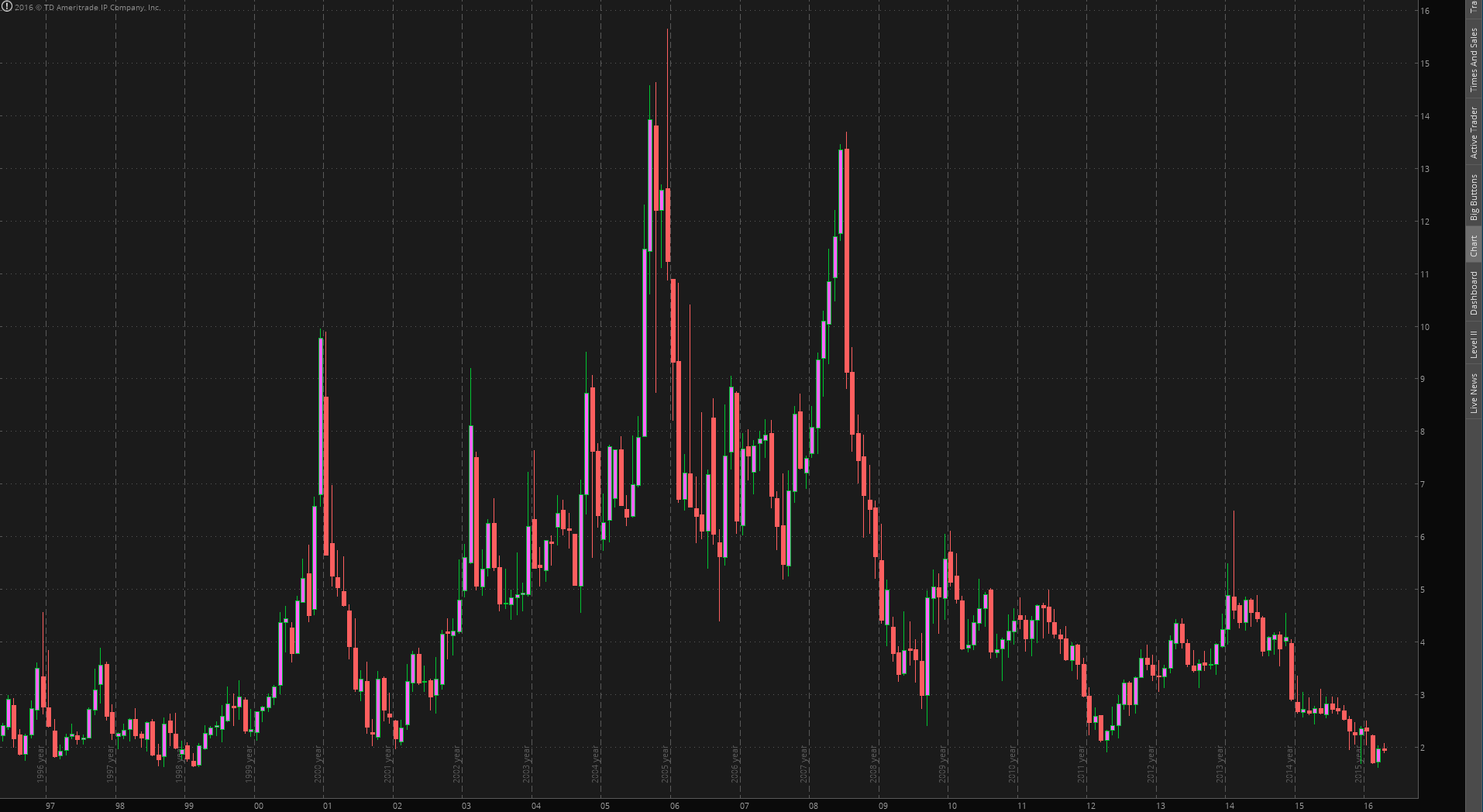 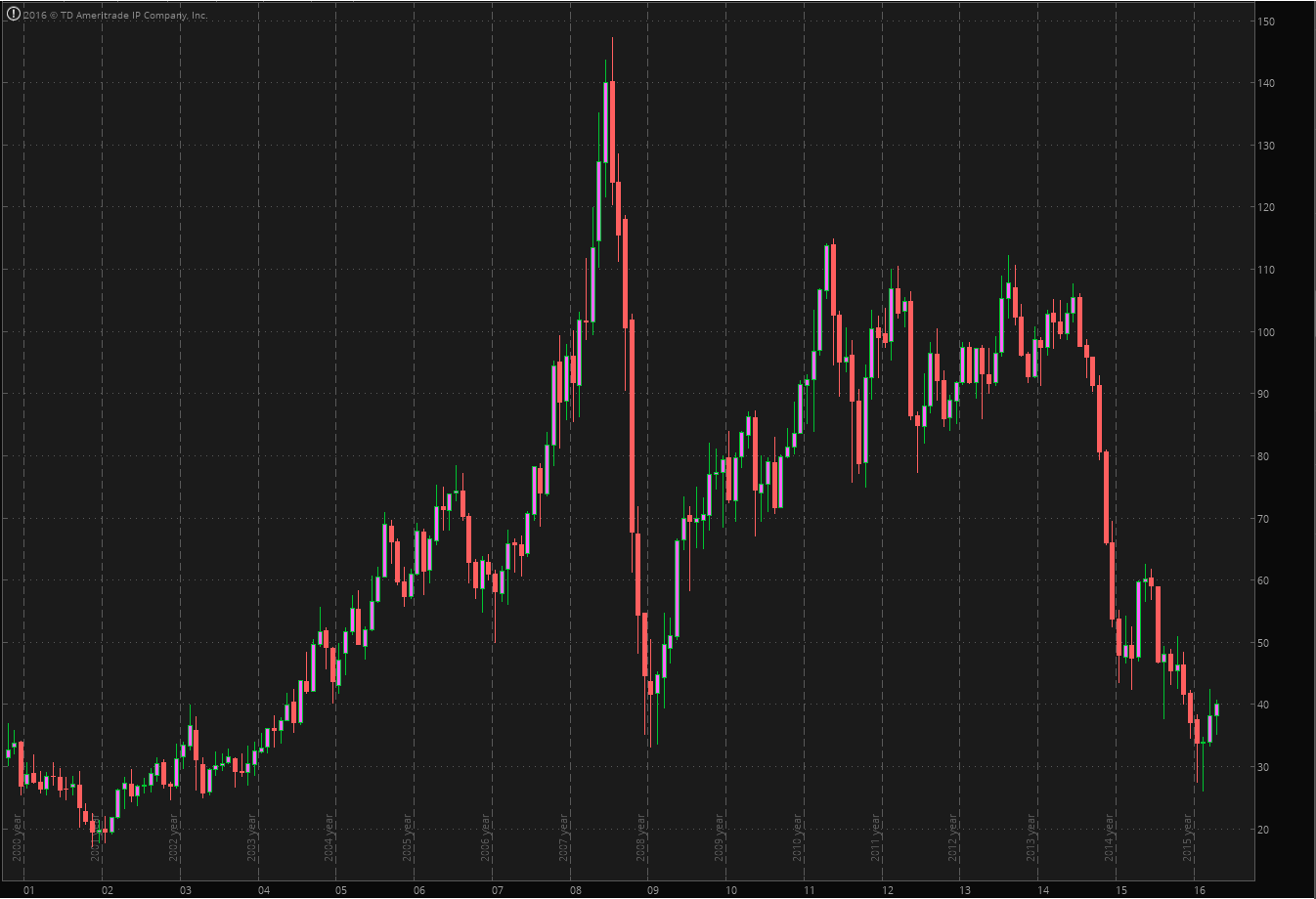 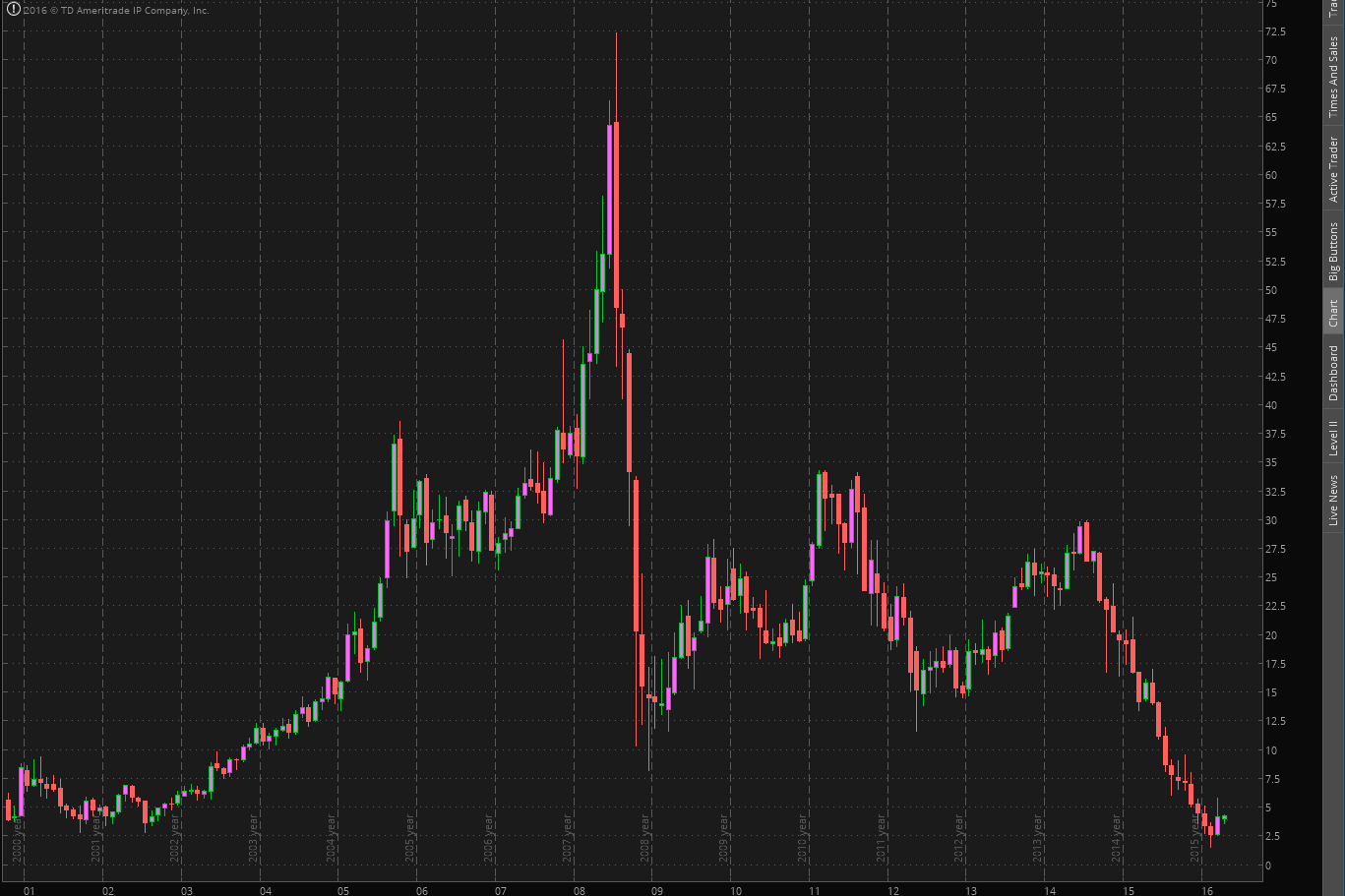 A bet on Chesapeake is simply a bet on Oil & Gas. Despite their practical importance, don’t let management actions, company announcements, and market commentary about company specifics obfuscate the only numbers that matter for Chesapeake: the price of Oil & Gas.

Given that, where do we go in Oil? Everyone from Middle Eastern oligarchs to Upper East Side traders are cheering the recent rally in Oil. It is certainly possible that production cuts, increased OPEC coordination, and a weakening US Dollar will buttress Oil. But this move so far is only defined on shorter timeframes, very much within the context of the longer timeframe downtrend trend that began in July 2014. My proprietary Complexity Science Equilibrium Framework has yet to confirm a major character shift in Oil. Some specific observations:

Maybe some of the bullish fundamental factors at work in Oil can result in a price spike in Gas? For now, almost the same comments made about Oil applies to Gas. The market remains entrenched in a predictable downtrend and has been since late 2014. My proprietary Complexity Science Equilibrium Framework has yet to confirm a major character shift. Some specific observations:

In recent times, it has proven foolish to invest for the long-run against the prevailing long-term trends in Oil & Gas. Recall industry CEOs and other experts confidently predicting a stabilization of the Oil market in late October 2014, just a month prior to the Thanksgiving Day oil crash and ensuing multi-year drop into early 2016.

If you are going to trade and invest in Chesapeake under the premise of a company recovery into 2017, understand that with all assets pledged to lenders, it is an all-in bet for equity holders. A positive outcome requires a material recovery in Oil & Gas prices. And in those markets, as of yet, the trend is not yet your friend. Keep one eye on the price of Oil & Gas.